Drawing Rooms celebrates the life and work of David W. Cummings, and a life lived with Beatrice M. Mady. They met in 1977 and began a relationship as artists and a romance that would span four decades. David passed from us last year. Drawing Rooms is pleased to show much of his work in this retrospective, which includes Beatrice’s work as well.
by Peter Delman
3/13/20

David & Beatrice: Hands and Other Symbols. The Work of David W. Cummings and Beatrice M. Mady, is a show about duality, primarily a tension between Modernist tradition and Romantic freedom. The joy of the work asserts that you can have your cake and, after all, eat it too.
David’s roots were in an orthodox allegiance to a Classical style loyal to the majesty of the grid and the primacy of flatness and the picture plane. But he also harbored an unruly urge to Rococo exuberance. His muse was Cezanne, who loved stable structure above all, but lit an iconoclastic fire that radically engulfed the world of art.
David’s work follows a stately trajectory from pure color field abstraction toward a hybrid of formalism and image-making. 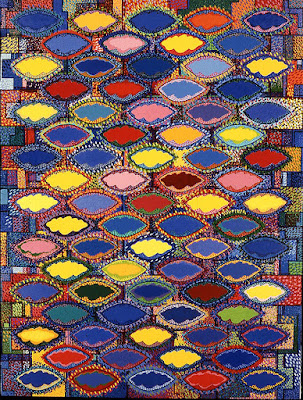 "Fire in the Hole" by David W. Cummings
In Fire in the Hole (1988), a phalanx of shapes threaten a color riot that in lesser hands would jostle for attention but here suggest a well-orchestrated symphony. 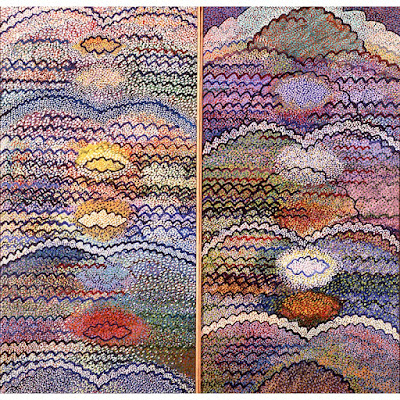 In an earlier work, Eastern Breeze (1974), we glimpse the genesis of these signature “cloud” shapes. This seminal work has a pointillist buzz and manic energy that is harnessed and brought to heel in subsequent paintings. 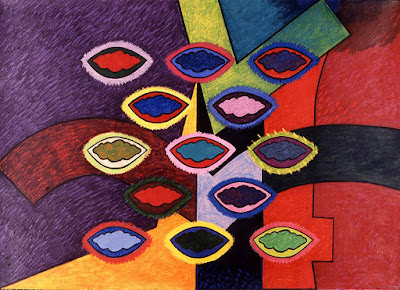 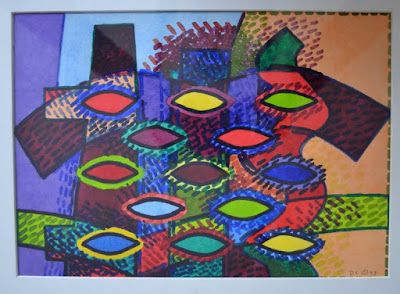 "In Harm's Way" by David W. Cummings
In Montauk and In Harm’s Way (1993), the once-sacrosanct picture plan is fragmented, no doubt in homage to the beloved Cezanne and Cubism’s coming storm.
With the advent of the hand paintings in the 1990s, David moved decisively from a flirtation with figuration to an embrace.  Abstraction still ruled the roost, mind you, but the hand shapes can no longer claim anonymity. They are “portraits” of specific people, though often that person is the artist himself. The hand image refers to a symbol of human self-expression ubiquitous from paleolithic times to the children’s art rooms of today, and to the hand-eye relationship essential to the artist. 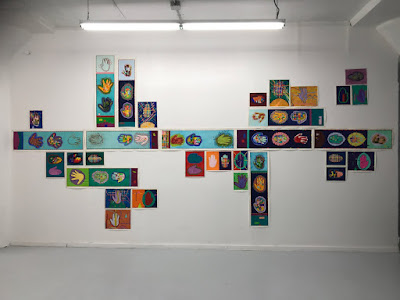 The large wall installation made up of hand paintings on paper showcases David’s mastery of rhythm, harmony, and radiant color. A number of paintings pair male and female hands— duality again.

The central image of Witch Hunter (2015) with its wild tapestry of color and explosive mandala exemplifies David at his delightful and daring best.
David is a master of many media. Whether pastels, markers, watercolor, or oil, every work dances joyfully.
In Beatrice’s paintings and digital prints, she explores Modernist ideas with emphases on evocative shapes and interlocking lines and, just as with David, luminous color is supreme. There is a clear division between the upper and lower sectors in each oil painting. This demarcation is straight and level and mostly painted black. In most cases, the palette of the lower region is more somber, as befitting a quasi-underworld. The space is often populated by a trio or trios of shapes recruited from the artist’s personal iconography.
Though some of her recurring images have their origins in representational sources, Beatrice thinks of them as purely abstract shapes. 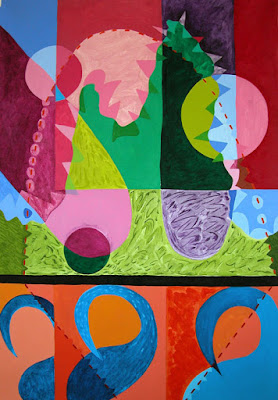 "The Dead Can Dance" by Beatrice Mady

In The Dead Can Dance (1997), Beatrice veers closest to a narrative interpretation, and this tension between symbol and abstraction is arresting. With pelican-like shapes roosting in the understory, and skeletal fragments lurking above, there is more than a hint of the dark and tragic haunting this powerful painting.

The circle is another favorite shape harkening back to Plato’s symbol of the cosmos. The backstory is that Beatrice’s engineer father gave her his compass set; her early fascination with this magical tool has influenced her work ever since. 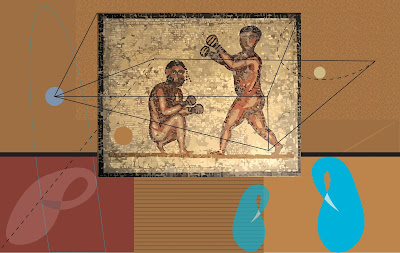 "Knock Out" by Beatrice Mady


In recent digital work, her love of antiquity and Matisse are pervasive. Arabesques of Tunisian architecture are overlaid with complementary lines and abstract shapes. Photo images of ethereal art from the real world are matched and conjoined with pure abstraction.
“Painting is another form of thinking,” according to Gerhard Richter. Perhaps there is an implication here of a fundamental duality in the life of an artist. The artist thinks and functions like everyone else in their everyday world, but in the studio, a transformation— possibly miraculous, can occur.
Phillip Guston described this idea in an interview with Robert Storr: In the studio, the artist is alone with Velasquez, Picasso, and all the great masters he admires. Then one by one they leave— and if he is truly engaged,“even he leaves”.
To inhabit that zone, even if only fleetingly, is the greatest fringe benefit of a creative life. This exhibition is replete with evidence that both Beatrice and David often experienced that altered and exalted state.

Peter Delman is an artist living in Jersey City. Read Peter's bio here and view his artwork here.
By Drawing Rooms at March 13, 2020