Landscape as subject matter has had, in Europe at least, a long history as being of the lowest rank of the painting genres. In America, however, its importance has been significant. In the 19th Century, landscape painting became the vehicle through which American ideals were most consistently expressed. Landscape painting performed the role of documentary as the westward expansion pushed its way across the continent, and also served to remind society what was being destroyed in the process. The theme of Arcadia lost runs through much of 19th Century landscape painting accompanied by the nostalgia for "unspoiled nature", which was rapidly disappearing. Great forests were consumed by the pursuit of “progress" as the machinery of capitalist production was let loose on the wilderness. At the same time, nature was gaining ascendency as a manifestation of the “Divine” was expressed through transcendentalist writings. This inevitably led to contradiction; Thoreau was aware that the axe, which created his dwelling, was also responsible for lost trees, which he missed in much the same way as he might miss a human companion. Nature was seen as an expression of God’s will and its representation took on spiritual overtones. It is against this backdrop that can be seen as a contemporary exploration of the spiritual in nature as expressed through trees. In her book, Nature and Culture, Barbara Novak identifies two complementary aspects of the American Sublime: Grand Opera and the Still Small Voice. The works in this show belong predominantly to the latter, although some share aspects of grander scale. 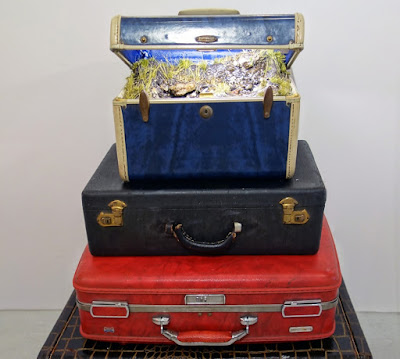 Kathleen Vance’s intimate works allow the viewer to enter miniature landscapes of the artist’s design. Placed within pieces of outdated luggage chosen for their emotional resonance, these pieces portray scenes based on the artist’s experience, but are not a recreation of any particular place. Ms. Vance intends her work as a meditation on the use and ownership of land and provide a respite from the fast pace of contemporary life. Jewel-like and precious (in a good way), these works serve to remind us of the value of nature’s restorative effect on the human spirit. 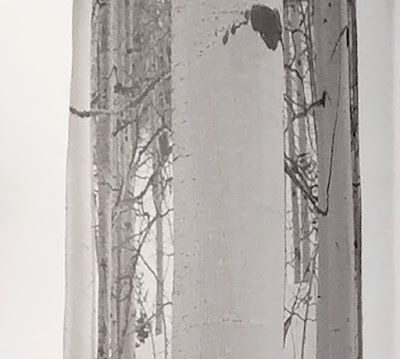 Dana Scott’s installation “Ghost Forrest” immerses the viewer within an environment created by columns of printed chiffon fabric hung on metal semi hoops attached to the wall. The sheer chiffon creates a subtle tension between a photograph of an Aspen forest printed on the surface and what can be seen of the room through the fabric. Site-specific, this work takes on the intimate quality of the room in which it is installed. One could imagine this work existing on a much larger scale. 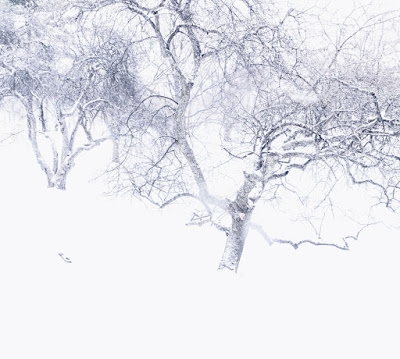 Geoffrey Sokol employs a more conventional approach to photography. Mr. Sokol utilizes both digital and film to create his images, depending on the mood he wishes to invoke. Although the photos appear to be black and white, all, save one, are in color, albeit extremely subtle in effect. These photos reflect both Mr. Sokol’s interest in Japanese prints as well as 19th Century photography. The very subtle handling of color is reminiscent of early photographs and evoke a mood of nostalgic revery. The result is poignant and beautiful. 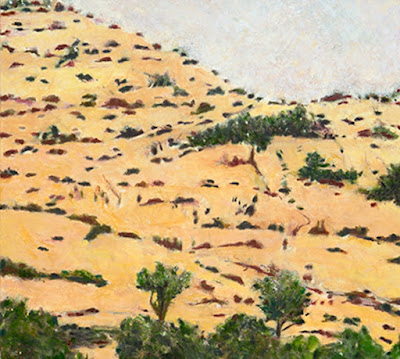 Shelley Haven’s quiet, meditative paintings employ calligraphic depictions of branches as well as a sure color sense to achieve a moment of distilled emotion. One senses a quality of absorptive observation in their making. Each painting seems to reflect something real, seen and felt. A highly developed sense of light infuses these works, making them specific to a time of day. These paintings draw one in and create a feeling of timelessness. James Pustorino’s wall-sized mixed media works combine drawing and painting in an investigation into space and structural systems. Using multiple views and a multidimensional approach, he creates compelling images of trees, which exist in urban environments and are often overlooked. Mr. Pustorino’s method is intuitive yet precise, using observation and careful draughtsmanship to achieve his ends. These impressive works exist in a place where the philosophical and spiritual combine with a lively visual expression and fuse into a dazzling whole. As impressive as these large works are, his smaller drawings display a high degree of accomplishment as well as an engaging intimacy. 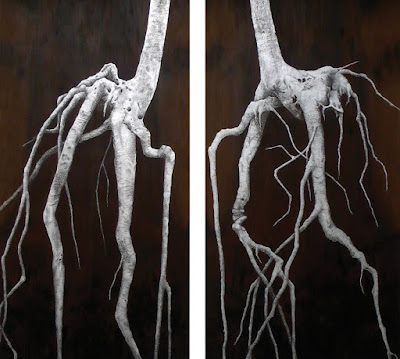 Julie Anne Mann has presented two compelling types of work; one two-dimensional, the other three-dimensional. Her “Starlet” and “The Twins” are both executed in etched silver on walnut burl. These works, which seem like portraits of anthropomorphized organic forms, have an eerie, haunting presence. The etched silver gives these forms a dramatic sense of light. Ms. Mann’s other work, “Threshold” is composed of gathered branches arranged in a circle on what could be considered the main wall of her exhibition space. The contemplative nature of this work is combined with a striking visual form and serves as a space for meditation. In a somewhat paradoxical way, the striking formal aspect of this work invites the most nuanced of reactions. 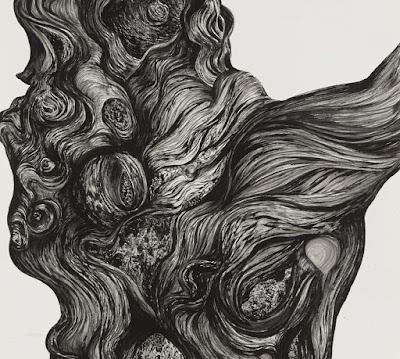 Anne Doris Levine Eisner’s work presented here consists of medium to large-scale drawings/paintings of tree trunks and branches executed in a variety of media on paper. These works express an intense emotional response to natural forms, which is reinforced by Ms. Eisner’s use of black white and grey in a highly charged manner. The works, which could almost be seen as confrontational, impress upon the viewer an intense physicality as if the images were wrought out of the most basic of gestures and technique. As such, they are highly effective as vehicles for Ms. Eisner’s obviously intense reactions to her subject. 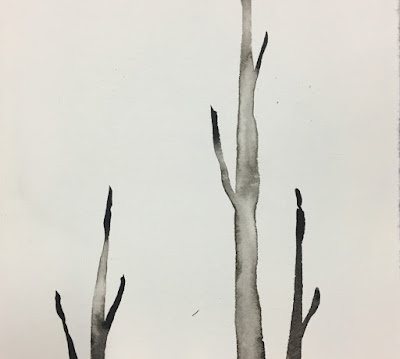 Yeon Ji Yoo’s ambitious installation completely fills her room with an invented environment that employs fantasy, dreams, half-remembered images in a thoroughly overwhelming manner. Drawings and sculptural elements combine in a seamless whole of undeniable intensity. Ms. Yoo’s work evokes delicate ephemeral memories interwoven with a strong sense of material thingness, as if the forms are haunted by memories of a past which remains tantalizingly out of reach, yet exerts its presence in an almost unbearable emotionality. This installation requires time to experience and its meaning emerges slowly and piecemeal as the viewer moves through the room. Ms. Yoo’s formidable technical skills never seem to call attention to themself at the expense of overall effect. Ms. Yoo’s installation is both a poignant personal recollection combined with a technical tour de force. 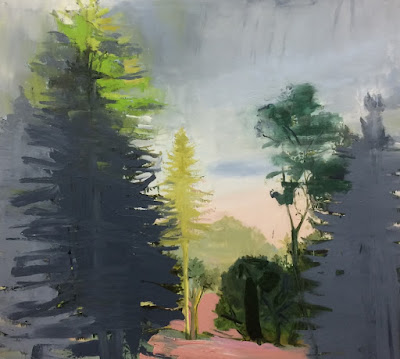 According to Claire McConaughy, she has been painting trees as long as she’s been painting. To be clear, Ms. McConaughy makes painter’s paintings in which material is transformed by gesture into space and light. It is akin to alchemy, in which a base metal is transformed into gold, and is no less mysterious. Although Ms. McConaughy’s paintings are made in her studio, rather than Plein air, there is nonetheless a sure sense of light and place; these are real places. Ms. McConaughy's handling of paint evokes Manet in its deftness and sort of loose precision, while her color sense seems to be entirely of her own invention. The paintings here range in size from small and intimate to largish and dramatic, yet each evinces a pitch-perfect sense of scale. Also included in her exhibition are several drawings executed in powdered graphite and alcohol. These drawings are exquisite investigations into line and form. They invoke an almost uncanny sense of space and share the casual precision of the paintings.

"The Innocence of Trees” provides a multifaceted glimpse of the role of nature in contemporary art and underscores its importance as a source of contemplation and the spiritual succor, which can be found there. In these times when nature herself seems to be under attack, it is more important than ever to realize how fundamental it is to our existence. The curator of this show, Anne Trauben, deserves a special acknowledgment in bringing these artists with divergent expressive strategies together in a coherent whole.

Bruce Halpin is an artist living in Jersey City. Read Bruce's bio here and view his artwork here.
By Drawing Rooms at June 19, 2017 No comments: