Webster's defines beautiful as “exciting aesthetic pleasure and generally pleasing: excellent. Beauty’s rather slippery definition allows for two distinct and possibly conflicting interpretations, only one of which is useful in discussing art. What is pleasing or harmonious in nature is just that; as a decidedly human dimension, the term beautiful can only be an attributed of art. Far from being a trivial concern, contemplation of the beautiful, as G.E Moore argues in his Principia Ethica, is along with human relationships, the greatest, or perhaps the only human good.

Subsequent to Edmund Burke's establishment of the sublime as the counter to the beautiful, beauty's validity has been subject to severe criticism and questionable status in aesthetic matters. Beauty, considered as pleasant or harmonious, has been in question as a desirable quality in art since Romanticism. Indeed, modernists eschewed “the beautiful” as superfluous and misleading as an aesthetic concern. What may be called “the beautiful” has been enjoying a restoration of reputation for some time now, and a deeper understanding of the role of beauty is emerging.

The latest show at Drawing Rooms in Jersey City, “Bold and Beautiful”, is testament to the validity of its reevaluation. Irony seems to have been banished in favor of a less distanced and more earnest engagement with beauty on the part of the artists in this show to varying degrees.

The artists are not aligned with any particular ideology, approach their work from different perspectives and engage with the history of their prospective mediums accordingly. Traditional techniques coexist with radical approaches without unnecessary friction. This is a show that allows artists to be who they are and cleverness is of less value than sincerity. 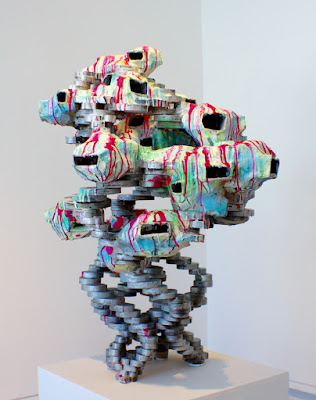 Ben Pranger’s sculptures use color in an expressive way without succumbing to the decorative. They use color, but are not dependent on it– in fact, color seems to provide a parallel experience to form. The sculptures look perhaps like the nests of robotic insects, which happen to have a lively and sophisticated sense of color. They are fun. While all of the sculptures are fairly modest in size, they could easily exist in a much larger size and scale. 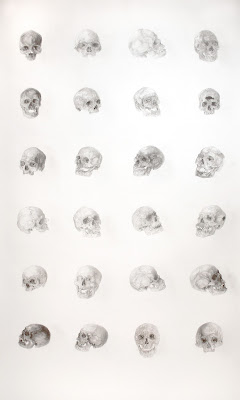 Jill Scipione’s drawings of skulls are sincere and powerful in a way that is not easily grasped. The effect is not that of momento, mori but some other less easily accessed emotion. Skulls are necessary reminders of our transience, that which remains after our passage through this life. Ms. Scipione’s use of skulls introduce a sense of monumentality in the way they are installed on the walls. The skulls are drawn life-size in a manner which invokes less an academic rendering, but a more scruffy, yet delicate approach, perhaps reminiscent of Leon Golub. Drawn from “life”, they evince careful observation delivered in an unstructured, yet controlled manner. Ms. Scipione locates the meaning of her work in the consideration of the human body as an expression of the spiritual. Her use of skulls, which span a large temporal and geographical range, engage concepts of human individuality and the redemption only possible through an undoing of history in order to restore hope and justice to all of humanity. 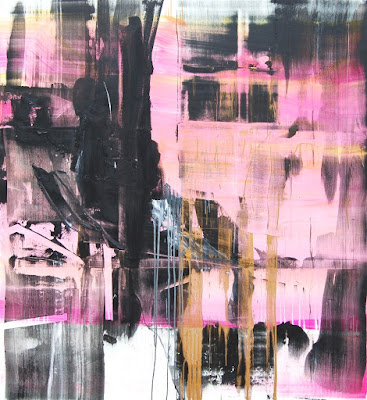 David French’s paintings evoke a kind of painterly ecstasy. These works knock the ball out of the park. Their large size tends to overwhelm the viewer in the context of their installation; it is difficult if not impossible to get far enough away from them to take them in one gaze. These tough, visceral works are painting with a capital "P", and deliver an emotional punch to the gut. These paintings engage beauty’s doppelganger, the sublime in their effect. 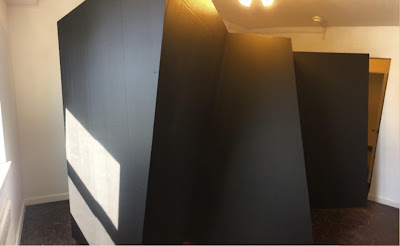 Thomas Lendvai’s sculpture provides a gripping experiential dialog within the confines of the gallery space. The work is comprised of sheets of painted MDF joined in a way that creates a paradoxical volume. The more the viewer tries to understand the form, the more elusive it becomes. It is impossible to get far enough away from the sculpture to take it in at one look, forcing the viewer to engage in a peripatetic engagement frustrating a simple comprehension of this sculpture despite the seeming simplicity of the form. This is highly effective work. 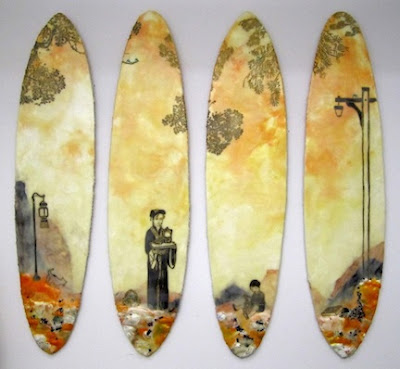 Cecile Chong engages beauty on the level of materiality and memory. Her encaustic paintings, densely layered with diverse ingredients, combine cultures, recollection, and personal history in a way that manages to be beautiful and poignant while avoiding sentimentality. These works seem to be telling a story that is like a dream that vanishes upon awakening, leaving only traces and hints of meaning. 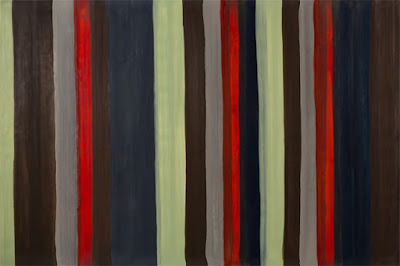 Kathy Cantwell's paintings are comprised solely of stripes of color, executed in encaustic, and provide chromatic complexity within a reduced set of means. Encaustic proves a congenial medium for Ms. Cantwell’s explorations, giving the color a physicality without diminishing optical effect as color. It is to Ms. Cantwell’s credit that the reductive process she choses in no way limits the depth and complexity of the expressive content of these paintings. 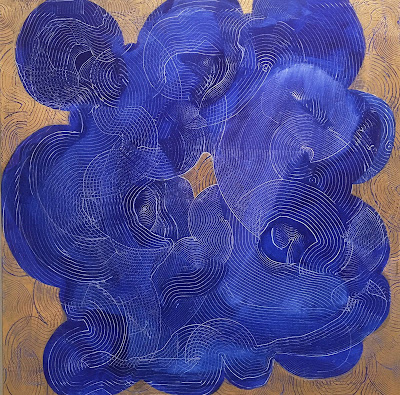 Andra Samelson’s unabashedly beautiful paintings are evocative of tantric art, as well as a sense of the sublime as expressed in nature, namely the cosmos and its attendant vastness. Employing various tools, Ms. Samelson draws into the paint she has applied, resulting in a gestural presence that is improvisational and spontaneous. The paintings presented here are modest in size but large in scale, giving the impression that they could be much larger. 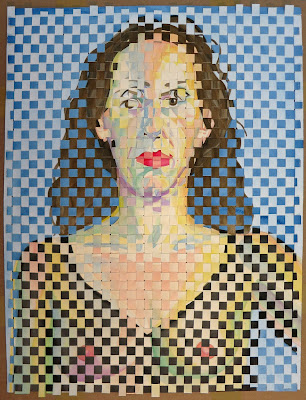 Patricia Fabricant’s work is a departure from her previous work, which is abstract and pattern-oriented. Here Ms. Fabricant presents vibrant self-portraits, which convey an immediacy and an emotional tenor which she attributes to recent events in the political arena. On one wall she has hung a series of self-portraits executed in gouache, which are highly expressionistic and confrontational. On the facing wall, Ms. Fabricant has cut similar paintings into strips and woven them together to create a new image, which recalls the original image, but presents a new fragmented reality. The emotions conveyed are shock, disbelief, anger, disgust, and a few others that are less readily identified. 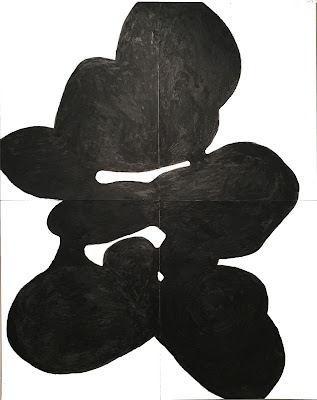 Faced with the nearly impossible task of curating one’s own work, Anne Trauben wisely left the curatorial duties to James Pustorino for her participation in the show. Comprised of both sculpture and drawing, Ms. Trauben presents a profoundly beautiful body of work. Her drawings are not preparatory work for her sculptures but, rather, are strong works that stand alone. A deft hand with her materials lends a cohesion to her work that might otherwise suffer in its diversity. Aleatory process is a large part of Ms. Trauben’s work. Her large, wall-sized drawings combine intensity with chance operation. Included are works comprised of wire, which Ms. Trauben considers another form of line, as well as clay pieces both on and off the wall. A particularly moving work is “Constellation 1 (for Margaret)" composed of several dish like forms made of porcelain which are installed on the wall in what seem to recall a constellation or perhaps asteroids in space.

The divergent ideas of what might comprise beauty provide a lively and well-considered viewing experience. One can easily imagine each of these artists extending their artistic vision well beyond the limits of this show.

Bruce Halpin is an artist living in Jersey City. Read Bruce's bio here and view his artwork here.
By Drawing Rooms at May 29, 2017 No comments:

Introducing Nieuw Art Blog: art on the Jersey Side

We're starting this blog to shine a light on, promote and create a connection between Jersey City and Newark visual artists and the current gallery scene.

We chose the name Nieuw Art Blog because it calls upon both the history of Dutch settlement in our area, as well as the longevity of our Jersey City contemporary cultural community beginning in the 1970's when artists pioneered this area.

We reached out to local artists to write reviews of select exhibitions. This blog, like many others, is a volunteer effort. If you are interested in being considered as an artist-writer, or you are a writer interested in reviewing art exhibitions, please send an email to info@drawingrooms.org subject: Nieuw Art Blog, and include a writing sample. Thank you.
By Drawing Rooms at May 29, 2017 No comments: