The birds are embodiments of the threatened world of nature and a spiritual aspect or projection of humans, an alter ego, in a sense: knowing and vulnerable. 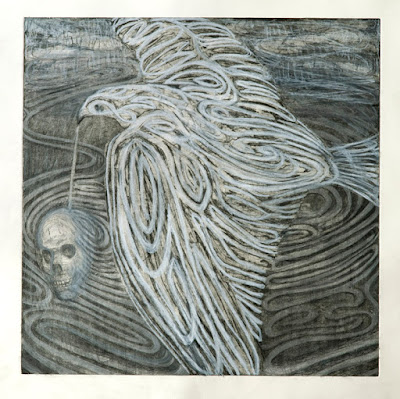 In the over thirty works by Margaret Weber which are on view at the Drawing Rooms, certain over-arching themes emerge. Nature, as well as man’s interaction with it, and concerns over environmental and human destruction predominate. In the first room, a hawk is hailed as a harbinger, carrying a small human skull on a stem over what appears to be a deluge. According to the artist’s statement, this series of intaglio prints from 2013, entitled, Dark Passage, asks a question: “Will nature carry on despite human destruction?” The question is even more poignant now that politicians and corporations do not even acknowledge the effects of global warming and the fact that it is largely caused by human destruction and pollutions. Weber titled her 2013 catalog, published by Victory Hall Press, “Birds of Pray,” turning the usual predatory birds—hawks, falcons, owls— into prophetic seers of human destruction, while still holding out a hope for some force behind man, a divine force, delivering us from ourselves. 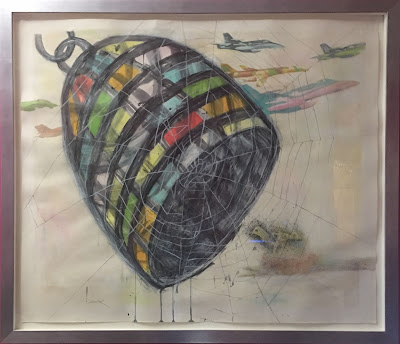 Birds are part of several recurring motifs throughout this modest, yet thought-provoking retrospective exhibition - dedicated to Weber, who unfortunately passed away last year due to cancer. Since Weber moved to Jersey City from New York City in the early 1970s, she completed both undergraduate and graduate studies in Fine Art at the Jersey City State College (now New Jersey City University), and taught art at Jersey City’s public schools for nearly three decades. Because of her devotion to art education and art advocacy for the emerging artists’ community in Jersey City (including co-founding of Drawing Rooms), she is honored by this posthumous exhibition. 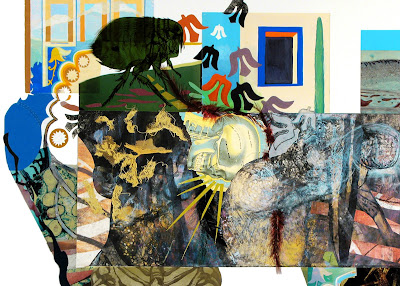 The Flea and The Mortal
Painting, Collage, and Intaglio, 2007

Weber repeated her favored motifs, of birds, birdcages, helicopters, and various body parts because she ran an intaglio studio and was able to utilize the same intaglio plates to create multiple impressions. She would often cut out her prints and collage them with found paper, textile, feathers, and other materials. In one of the largest works in the exhibition, a diptych entitled, Song of Icarus, helicopters emerge out of the body of a goddess-like figure who has actual bird feathers for hair, while a large hawk covered with human hair is falling into the ocean as Icarus did in the Greek myth. By exchanging some of human characteristics with those of a bird, Weber sought to evoke both the “bond and rupture” between human and animal nature. (Weber, p. 46). By creating a warm tonality of bright colors in this diptych, however, she embedded elements of hope in an otherwise fatalistic scene. 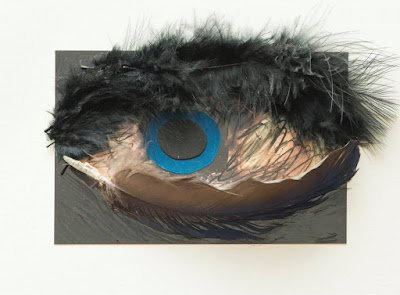 Weber’s interest in Greek myths and her ability to connect them to contemporary social and political concerns recalls Nancy Spero and her drawings/collages. Like Spero, some of Weber’s work centered on the symbolism of female bodies, visualized as fragmented body parts. Mixing personal and political concerns echoed the strategy of the feminist art movement as well. A couple of her works also contain the motif of fists, expressing the power to resist and fight. An exhibition like this will hopefully inspire younger audiences who are distraught in the current political climate to find their own voices and the means by which to express them. 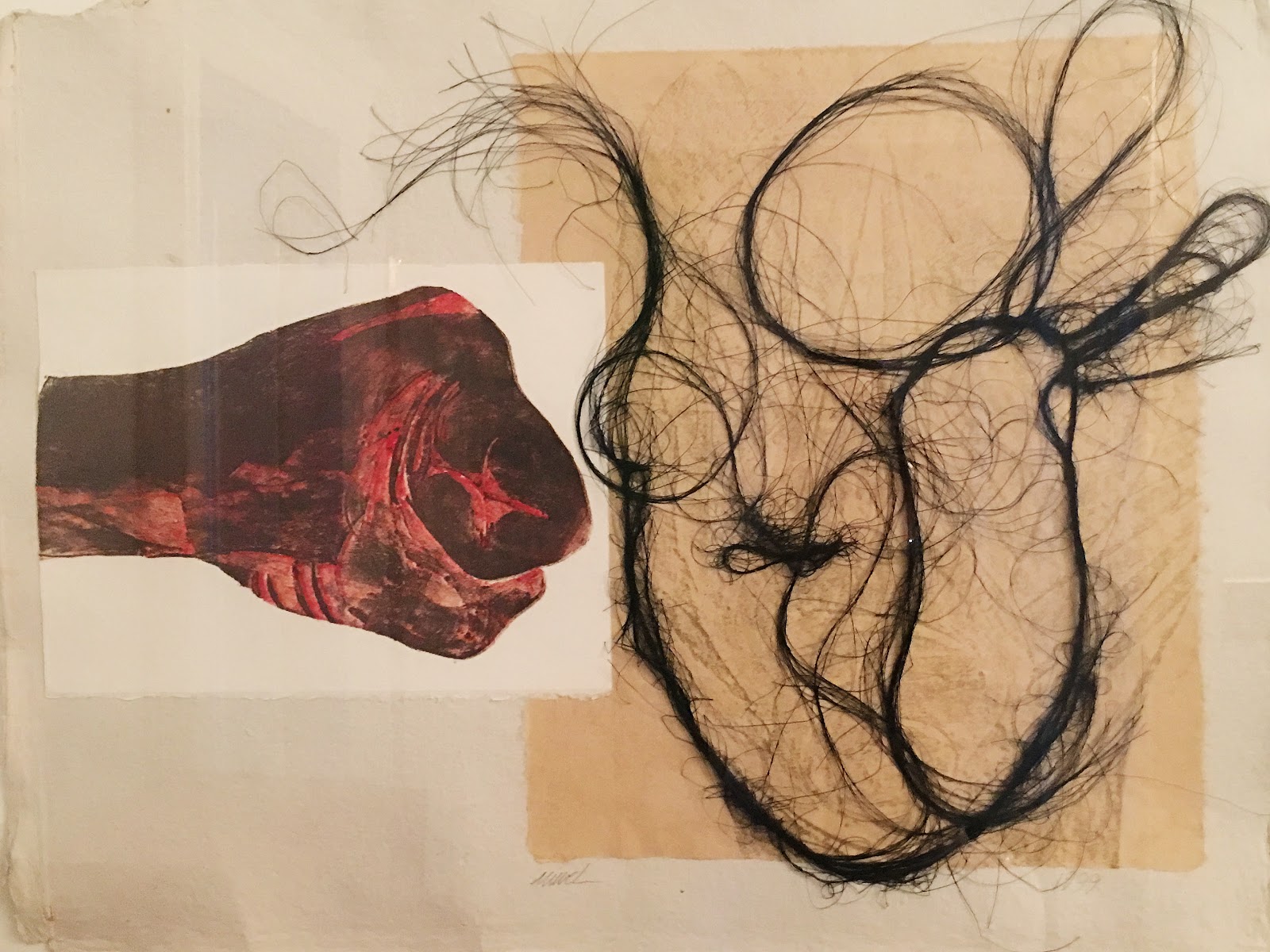 Honoring Margaret: The Work of Margaret Weber, 9/22/17 - 11/11/17, features drawing, collage and prints by Margaret Weber. The exhibit is curated by Anne Trauben.